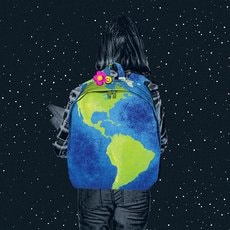 Synopsis
At a middle school in this seaside town, the unthinkable has happened, placing a bewildered community in the national spotlight. Stuck at home in a state of shocked limbo, Julie and Zander, two thirteen-year-olds, try to make sense of the chaos they witnessed, their awkward crushes, and an infinitely more complicated future – but the grown-ups are no help at all. An urgent response to our times, This Flat Earth is a startling and deeply felt story of growing up in our confounding world.

Reviews
Lindsey Ferrentino's most daring play to date, with profound and essential subjects. ​There is no denying the urgency of this work. She is bravely attempting to contextualize 21st-century horrors within the sort of existential framework in which Thornton Wilder and Edward Albee specialized. The prolific Ms. Ferrentino has already established herself as a dramatist willing to wrestle with overpowering contemporary subjects. 'This Flat Earth' traces childhood fears no parent can allay. Very sincere.
- Ben Brantley, The New York Times

All-too-timely.  There are felicitous touches to this latest play from the talented Ferrentino, the play quietly expresses a hope that school shootings may someday be a horror that exists only in the past.
- Michael Sommers, New York Stage Review

This Flat Earth, a poignant and distressingly timely new play by Lindsey Ferrentino, takes on the question of how kids and parents navigate catastrophe’s aftershocks with an illuminating — and refreshing — frankness. Ferrentino intuitively grasps the slippery ways kids (or anyone) might deal with collective trauma. The play’s mix of perennial school-day dilemmas with a shooting’s tragic aftermath draws us closer to imagining what often feels so unimaginable.
- Naveen Kumar, Towleroad 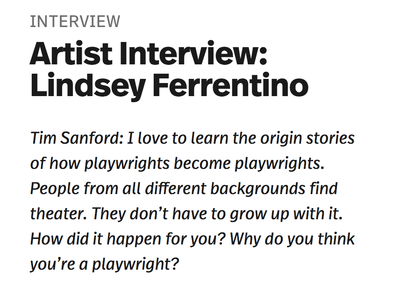 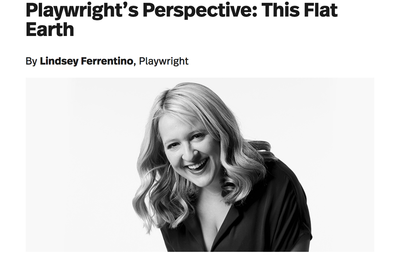